You have been captured and taken to a Haunted Castle, the Akumanor, but you've just managed to escape from your cell in the catacombs, armed with your sword and shield, you have to do your best to save yourself from this mess! Good luck!

Gamepad Controls (PS):
D-Pad/Left Stick: Move
Circle: Jump
X /Triangle: Attack
D-pad Down/Left Stick
Down: Raise Shield
Start: Pause
(Note: Any controller you have plugged into your PC should work, so long as it is Gamepad 0 or Gamepad 1, the buttons on other controllers correspondent to the ones listed above on a PS controller should work identically)

In the description of my submission to GBJAM 7, Akumanor Escape, I said: "Maybe someday I'll make a 'DX' version wherein I can fulfil my ambitions for this one..."
Well, this is that! With this game, I set out to not only fulfil said ambitions, only in colour of course, but also to address just about every issue anyone had with the original version!

I'm also including a downloadable Windows 32 version if anybody would prefer that over the browser version.

I made sure to stick to the specs of the GBC as accurately as I possibly could, only one BG layer (plus the Window layer, but that's just the HUD) only 3 colours per sprite/background tile, 7-ish palettes of 3 colours + transparency each (not really sure if the GBC has 7 or 8 palettes per layer, the info I got on that was conflicting, so I mostly just stuck with 7 palettes just to be safe, if anything, I could just do a scanline interrupt at the HUD on real hardware and it'd still look identical)

I could not simulate the sprite limits, either total or per-scanline, but I've been rather conservative with my sprite usage to begin with, aside from layering sprites with different palettes to get more colours for the protagonist, but even then, that shouldn't really be an issue even in real hardware. I tried to make my sprites as narrow as possible, I thought the GBC could handle up to 64 sprites on-screen, like the NES and the PC engine, but partway through development I found out it can only do 40, needless to say I was rather disappointed, but I can work with it, I did a lot of flickering on minor sprites in order to minimise sprite usage.

Any and all parallax scrolling was made using one or more of the following tricks:
- Animating tiles when the camera moves
- Splitting the BG layer horizontally and moving the different parts at different speeds
- Rendering sprites as BG objects (usually behind the BG)
(Note, I didn't just make extra layers in-engine to simulate these tricks, I actually did them)

As for the sound and music, I tried my best to stick to the 4 sound channel limitation, I've made all songs and sound effects in Deflemask using the Game Boy soundchip, which means that they are all playable in real hardware, but as for playing them in-game, I've recorded channels 1 (Pulse) and 3 (Wave) in their own file, as they never get cut out, channel 2 (Pulse) in its own file, and channel 4 (Noise) in its own file, and whenever I need to play a Pulse-based sound effect, I mute channel 2, and when I need to play a  Noise-based sound effect, I mute channel 4, unfortunately that means that I have 3 sound files playing simultaneously, and I have no way of preventing any possible desyncs, I can't even check whether they are in-sync at any point! That's just not supported by C2's audio plugin... So in order to remedy that, I've made sure that every time the main file loops, I also set the other two files to their loop points, but that means if the music ever goes out of sync (which does happen) it only fixes itself when it loops, so I've made it so that you can use the backspace key to reset the song if it ever goes out-of-sync, that fixes it 90% of the time, and you can press it as many times as you want, so if it doesn't fix itself the first time, it probably will the 2nd or 3rd. This wouldn't be an issue if I could simply play the actual Game Boy Sound files in the browser, and was also able to mute/unmute individual channels, but alas, no such plugin exists for C2, at least yet...

[Edit] I was wrong, it is actually possible to compare the position of different audio files, it's just that it isn't an event you can find on the Audio plugin, I had to use a System function to compare two values, and then get the playback time from the audio plugin using a string I didn't know about for the different files, and then make it so that if they strayed too far (and by too far I mean more than 1 frame either way) I just seek the position of the different sound channels back to the same as the main file.

[Edit] Also thanks to Retrocade Media for the tip that helped me fix the audio sync issues!

the game is amazing, It is awesome

Over the couple years I've had this game on my PC, I've probably replayed it at least 20 times now.  Just wanted to say that you're an amazing dev, your games are very satisfying to play, and I'm hoping to see more from you in the future!

Why does she look awfully similar to Sabre from the Anime Fate series?

Thanks for sharing! I recorded myself playing this video game and uploaded the session on my gaming YouTube channel:

how do you get da foxes

Stab them, but you can just run past them, they don't follow you when they're off-screen...

also thanks for reply so soon michirin

Reply
Maltosier1 year ago
Played through this a bit on my channel! I'm bad at these kinds of games but it was super fluid and fun. Thank you for the experience :)
Reply
Michirin1 year ago(+1)

Michirin! I have to say I really enjoyed this game!

I really liked the game play and atmosphere of each level. It feels really satisfying to slash your sword on enemies! The bosses are pretty imaginative and fun too! I also like that there are secrets that reward players that like to explore.

By the way, what are the coins for? Is it like a scoring system, or is there a way to buy stuff that I don't know about yet?

The music was damn good too! You could catch me listening to the themes for each level on a playlist! I especially liked level 2's theme because it was really energetic, and it sounded like a couple of the sound channels were emulating electric guitars for rhythm! You KNOW its good when it does that!

The only thing I can say that I don't like is that the game is too short! Please make more Michirin!!

The coins are just for score... I THINK if you collect enough of them you get an extra life, but I forgot... And yeah, I'm working on more.

Michirin i dont here any sound or music

Your browser must be compatible with .ogg files. If you're on windows I recommend playing the downloadable Windows version.
Also, please try to make your own post next time instead of replying to someone else's.

Try Firefox or Chrome, or just download the Windows version instead, which is what I recommend.

Hey Michirin, I have an idea as to how you could make sure music is synced, with just one line of code (Per track you play).

The only issue is you need to make sure every song is exactly the same length. I hope this helps,

(Also I would have emailed this to you, but I couldn't find any contact information on your profile)

Wow, thank you VERY much for the tip! I didn't know this was a thing!
I was going to try syncing my songs to .mod/.xm files in future projects, but this might just be a lot easier!
I'm gonna try it out, and if it works I'll surely update the game to make use of it! (And possibly even thank you in the credits if you want)

(Also, yeah, if you had emailed me chances are I wouldn't have seen it, so it's better this way... Might put up some different contact info later though...)

Just one question, am I supposed to use filenames or tags in Audio.PlaybackTime("ThisPart") ?

[Edit] Okay, nevermind, I figured it out, and worked, but it made the audio all garbled up... But then I tried giving it a small margin for error (roughly one frame off either way) and that pretty much got rid of the garbling!

Nice! I'm glad it worked. You don't have to credit me, (but I certainly wouldn't mind it). The idea just sort of randomly popped in my head while I was playing the game, and I thought it could help.

Loved it. Great music too!

Glad you did! Thank you very much ^^

Thank you very much ^^

Awesome Game! I miss this type of game! I feel so nostalgic! :3

I Hope You won't mind if I upload my gameplay on my youtube channel, I want to share it with my friends and to others!

Thank You For The Game!

Keep Up The Good Work! :D

I'm very glad you enjoyed it ^^

And yeah, I don't mind it at all, share away!

Nice start! The only negative thing I have to say is about collision mass of the cyclop. I don't understand where and when i'm supposed to hit him...Thanks for your attention.

This game definitely needs to become a mobile game, and I'm wondering what engine this is made with

It was made with Construct 2. It's possible to make a mobile version without much effort, but to be honest, I have no interest in making it, I'd rather make an actual GBC version...

Hello, congratulations on the game; are you working on a gameboy color version?

I'd love to, but I can't code, that's why I use construct... Well, and also because it's really good!

cool game,i like the style, the soundtrack,its one of those games i can play this at my free time. "Great Job!"

Thank you very much ^^

Fantastic game, super happy to see a great game come out of Construct 2! 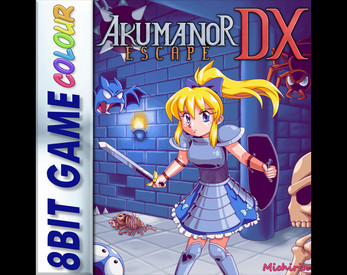